African Dynamics in a Multipolar World 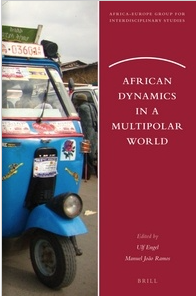 Fifty years after the foundation of the OAU and the consolidation of most African states and institutions, the international panorama and Africa’s position in it have changed considerably. The world’s geopolitical and economic configuration has evolved, with new actors appearing in a new period of globalization. In tone with ECAS 2013, this volume proposes that the experiences appearing in Africa question dominant paradigms in terms of political practice and academic reflection and thus offer a clear challenge to the academic community. The volume offers clues to answer questions such as: What is the impact of the current processes of globalization for African countries and African citizens? How should African Studies be engaged to gauge African dynamics, both at a local and global level? What interdisciplinary means and tools should be brought in to produce an epistemologically relevant view (or narrative) of the issues under analysis?

CONTENTSAbout the authors African dynamics in a multipolar worldUlf Engel and Manuel Joao RamosMaputo home spaces: Working for a Home, Working at HomeAna Bénard da Costa and Adriano BizaChanging patterns of intimacy among young people in Africa Alcinda HonwanaListening and archiving migrant voices: How it all beganAlessandro TriulziOvercoming the cost to Africa of being a good neighbour to Denmark: Unconstrained geography as an alternative to the end of historyJohn DaviesCorporate social responsibility in Africa: New trends for development? A new field for African studies?Virginie TallioAfrica’s demographics: a threat or a bonus?Ana Pires de CarvalhoDoctoral studies in sub-Saharan Africa and the planned RESSESA interventionPaulos Chanie and Paschal B. MihyoAfrica globalized? Multipolarity and the paradoxes of time-space compressionPreben Kaarsholm‘The road to Sudan, a pipe dream?’ Kenya’s new infrastructural dispensation in a multipolar worldMark LamontThe compulsion to do the right thing: Development knowledge and its limitsElisio MacamoThe study of Africa in a multipolar world A perspective from withinEbrima SallIndex